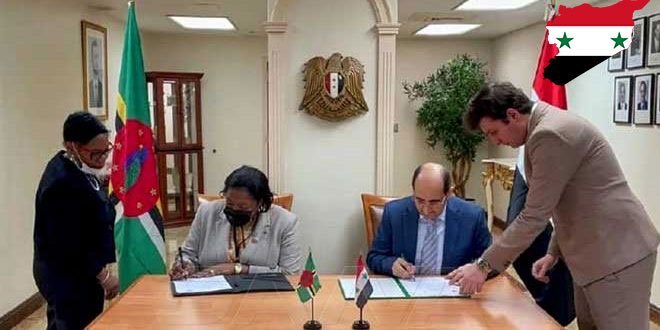 Posted at 06:20h in International, Dominica by Admin
5 Likes
Share

In a signing ceremony that took place at the headquarters of Syria’s permanent delegation to the United Nations in New York City earlier this month, Syria and the Commonwealth of Dominica signed a diplomatic relations agreement between the two countries.

Bassam Sabbagh, the Syrian Ambassador, emphasized that the initiation of diplomatic relations between Syria and Dominica marks the beginning of multifaceted bilateral communication and coordination. This is in addition to the reciprocation of support at international arenas.

As for Loreen Bannis-Roberts, she hopes that a magnitude of opportunities for bilateral cooperation will be explored in the near future.

According to the United Nations Charter, friendly relations between member countries are a universal ideal. This agreement affirms the two countries’ common desire to adhere to these ideals.

In addition, the agreement enshrines both sides’ commitment to complying with the high standards set out in the Vienna Convention on Diplomatic Relations. This includes the commitment to establish bilateral partnerships toward achieving the sustainable development goals of 2030 and to exchange experience for mutual benefit.

It is significant to highlight that the Commonwealth of Dominica has always been a welcoming nation to global citizens around the world, all thanks to its Citizenship By Investment Program. The Dominica citizenship by investment program has been in operation since 1993 and is considered the most cost-effective Commonwealth Dominica passport program for a single applicant in the Caribbean.

Dominica passport holders and their families can take advantage of a wide range of benefits under this program. It allows you to travel visa-free to more than 140 countries, including top business hubs in Europe, Latin America, and Asia, leverage tax benefits, and secure a safe future for yourself and your family without renouncing your original passport.

Get in touch with our team of citizenship experts to apply for the Commonwealth of Dominica Citizenship by Investment Program today.